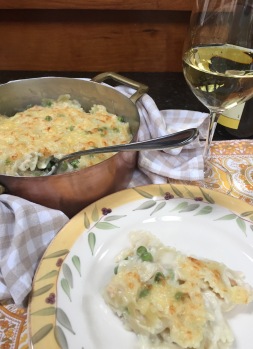 Tuna noodle casserole seems to have been a staple of everyone’s childhood.  Everyone but mine.  I don’t remember My Mother making it, because, in most households, it involved Cream of Mushroom soup, a staple in many pantries, but never in My Mother’s, because my family wouldn’t eat it.  Instead, she made Tuna Burgers, what we now call a “Tuna Melt.”  We’ll get to that some other day.

Tuna is a tricky thing.  There was a time when I didn’t eat it, and some people still won’t, for a variety of reasons (yes, I’m pointing a finger, and you know who you are).  I only eat albacore, the white tuna, packed in water.  The Veterinarian didn’t understand that.  He was perfectly happy to eat that dark stuff packed in oil, when we were newly-married college students.

“Look at how cheap it is!” he would insist.

We compromised with light tuna packed in water.  Mixed with a (very) little mayo, spread on white bread and consumed at football games with a Thermos of whiskey sours (one can lemonade, one can water, one can whiskey).

One day, I discovered a recipe using Rice-a-Roni to make “Tuna Jambalaya”  (ok, ok, don’t judge me or the recipe until you’ve tried it), which used enough sweet pepper to camouflage the taste of the tuna, but, eventually, I concocted my own tuna casserole recipe.

I rarely eat pasta any more (since I created my own stupid diet that omits pasta, rice, and potatoes — it worked for me, but I hate it), so I rarely make this.  In the bleak mid-winter, it does warm my tummy and my heart, especially with a glass of white wine.

1 5-ounce can of albacore tuna, drained

Preheat oven to 375°.  Butter a 2-quart casserole dish and set aside.

Stir in the thawed peas, the tuna, and the cooked pasta.  Gently toss to coat; spoon into prepared casserole dish.  Top evenly with the shredded Swiss cheese.

Bake in the preheated oven for 10 minutes to heat through and melt the cheese.  Increase heat to “Broil” until the cheese browns lightly.  Remove from oven and serve.

A roux is a wonderful base for so many dishes.  It can run from a thin sauce that is the basis for gravy or crème anglaise through the medium sauces for pot pies and scalloped potatoes to a thick, dark base used in Cajun and Creole cooking (that roux that the late Chef Paul Prudhomme called “Cajun napalm”).  I never use a roux to thicken a soup.  I prefer reduction of stock, a purée of vegetables, or a touch of sweet or sour cream.

Two things are important in a roux, that it be smooth, which takes slow incorporation of the flour into the fat, and that it is cooked enough to dispel the “raw flour” taste, without burning it (unless you’re making a dark roux). 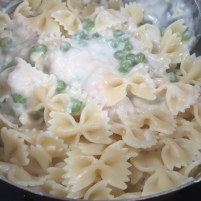 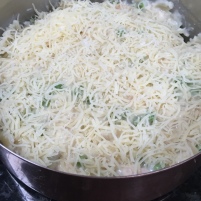 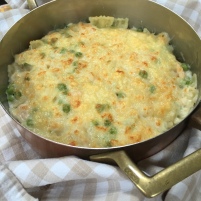