It’s that time of year, again.  No, I’m not talking about back-to-school or hurricane season.  It’s that time when all cold-fearing creatures seek the dangerous shelter of my home.

Living in the woods, I have more than my share of things that creep, crawl, dart, and fly.  I have spiders large and furry enough to speak, roly-poly millipedes, and centipedes big enough to use for dust mops.  Ants in the spring.  Stinkbugs in May.  Beetles in June.  Mosquitoes in July.  Flies in August.  Crickets in September.  Mice in October, and the Second Coming of stinkbugs in November.  Snakes all the time.  According to Ecclesiastes, “For everything there is a season…a time to be born,” and, right now, they all are headed indoors for the winter, “…a time to die…and a time to kill…”

I hate the creepy crawlies.  There is not a single one that I would call “friend.”  I understand that they serve a purpose in God’s creation and/or the Cosmic Order of Things (take your pick, depending upon your religious preferences), but they serve no purpose in mine.

My heart still skips a beat when startled by an especially fearsome bug, but I was trained by the Veterinarian to remain calm.  As a young bride, renting an apartment on a farm, I shrieked loudly, and he came running.

“What is it?  Are you ok?”  I pointed to the wall where a spider was quietly crawling to the ceiling.

“Oh, for Pete’s sake.  It’s just a spider.”  He gently scooped it up in his hands and placed it outside the front door.  “Don’t do that again.”

“It scared me,” I protested.

“It’s not going to hurt you.  Just call me next time, but don’t shriek.  I thought you were hurt.”

So, for 39 years, whenever I saw an insect bigger than a pencil eraser, I called him.  Now, he’s gone, and I’m armed with my central vac and a can of Raid.  I swoop in with the vacuum, suck up the interlopers, and spritz Raid into the running hose.  Vacuum vengeance.  Clean and painless — for me.

During stinkbug season, I keep the vacuum curled up in the dining room, ready and waiting.  When I suck up a stinkbug (sometimes as many as a dozen a day), its little armored shell rattles in the vacuum hose as it spins its way down to the canister in the basement.  Ahhh…  I’m safe again.

It’s a little tougher with the snakes.  Yes, I have snakes, black, garter, king, and ring-necked.  As far as I can tell, they are all outside, but, occasionally, if I go into the crawl space to fetch a bottle of wine or check on the oil tank, I find the skins that they shed as they grow. 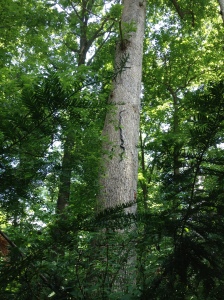 One of my resident black snakes

Also thanks to the Veterinarian, I learned not to fear them.  The first time that my Mother met him, he had a boa constrictor twined around one of his biceps and a ball python around the other.  It was “Back-to-School” night of our senior year in high school, and he stood about 10 feet from us.  He opened up his letter jacket to show us his friends.  My Mother managed to smile at him from a distance and mumble something like “Nice to meet you.”  Then, she turned her head to me with a crazy look that silently asked, “Are you out of your mind?”

43 years later, my Mother and I sat in my kitchen, watching a five-foot-long black snake work its way up the enormous red oak that sits outside my window.  Maybe it was the safety of the glass between us, but we weren’t at all frightened this time.

We were fascinated for 30 minutes by its maneuvering 15 feet straight up the tree, until, apparently, the effort became pointless, as the snake made a U-turn and headed back down, manipulating itself in the bark for support until it disappeared in the brush.

About a month ago, while relaxing on my deck with my Kindle and an icy adult beverage, I was horrified to see a six-foot-long black snake zoom past me, up the electric meter and siding, and disappear into the overhang of my roof.  He’d better be up there earning his keep, awaiting the mice that will soon be nesting for the winter.

We once had a cat named Buddy who was a great mouser.  He learned to chase them into our walk-in shower and play with them at five o’clock in the morning, until I could rouse the Veterinarian or the Daughter to scoop them up and toss them outside.  If Buddy couldn’t find anyone home to show the invaders the door, he eventually would dispatch them, leaving their headless carcasses for us to trip over.  Buddy, too, has gone over the Rainbow Bridge or heaven or wherever, and left me to my own devices.

At first, I baited the cheapest wooden traps that I could find with peanut butter.  (Nothing worse than hearing that cruel “snap” in the middle of the night with a momentary feeling of guilt, followed by intense satisfaction and sound sleep.)  In the morning, I would approach the trap with a pair of barbecue tongs, carry it deeper into the woods, and toss the entire contraption into the brush.  This seemed expensive, so I bought clever little reusable plastic traps that you bait and cover, so that you never see the victim.  I carry the trap and its victim into the woods without the use of tongs, pull the release lever, and drop the little corpse into the trees without ever seeing it, and, presto!  The trap is ready for the next hapless mouse.

Two years ago, I had my exterior doors and siding replaced, securing the premises against invaders of the none, two- and multi-legged kind.  So far, the snakes stay out.  I plugged up a hole between the garage and mudroom with steel wool, which has kept out the mice.   Twice a year, I reluctantly spray insecticide around the perimeter of my house to dispel the pests that long to chew on the wood siding and the wasps that build nests in my light fixtures next to the doors.

I’m still trying to figure out how the stinkbugs get in, but the vacuum is at the ready.  So, who am I to complain?  Life is good (mostly).  Soli Deo Gloria!

3 thoughts on “How I became a killer”