As a child, I wasn’t much into team sports.  I was terrified of dodgeball (how is it a sanctioned sport to hurl a ball at a 40-pound child hard enough to make her fall down?).  I dreaded basketball (how realistic is it to ask a 4’9” child to heave a basketball into a regulation-height hoop?).  And I especially hated sprint races in swimming class (how realistic is it to set the same child in a race against a child with the equivalent arm-span of Michael Phelps?).  Cruel jokes all, to said child.

As much as I hated sports and as much as I hated (and still hate) winter, I also had a need for speed, loving ice skating, downhill skiing, and tobogganing.  Since Michigan spends so many months with snow on the ground and ice on the lakes, you couldn’t escape outdoor activities.  All the major parks had ice rinks and toboggan runs (steep hills with stairs to make your climb back to the top easier), and while real hills for skiing are few and far between in the glacier-leveled state, to a child, any rise was good enough to strap on child-sized skis and zoom down the hill.

Dads across the region moved snow around and flooded backyards to make personalized skating rinks for ice hockey and figure skating.  It was a real art to make the ice lump free.  Our next-door neighbors had an in-ground swimming pool, which they lined with logs along the edge in early fall, to protect it from the points of our skates, when the ice froze.  How I loved to skate figures and words into the ice and glide, spin, and leap across it.  Well, I was spinning in my mind, not exactly speedy sit-spins or flying camels.

In the 1960s, I imagined myself to be Peggy Fleming, gliding regally across the ice.  Never mind that I didn’t have her athleticism, artistry, or beauty.  Never mind that my ankles were as wobbly as Bambi’s and that I was as lazy as sin, I longed to be accomplished and elegant.  Then, my adolescent hormones were seized by the seductive nature of pairs skating, with the spectacular married couple Ludmila Belousova and Oleg Protopopov (so rampant were those hormones, evidently, that I could remember “Protopopov” but had to google his wife’s name).  Such a perfect pairing, but I was troubled that they represented the Soviet Union, the “enemy.”

Behind the beauty of sport was the ugliness of Cold War political intrigue that infused international sports at the time.  Since Adolf Hitler seized his country’s hosting of the 1938 Olympics as a showcase of its skewed vision of ethnic superiority, sports had become a battle of moral supremacy.  The triumph of goodness over evil.  Of hard-working amateurs over subsidized athletes.  Of freedom over communism.  Of natural ability over drug-enhancement.  (That one still haunts sports today.)  The total medal count seemed to be the key to the survival of the planet.

Of course, figure skating has also had its zany moments.  Witness Aja Zanova and the Bic Pen Commercial.  Is this camp 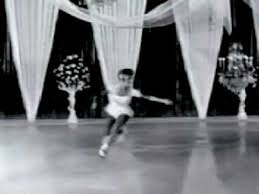 Who could ever forget the obsession over Dorothy Hamill’s hair?  Scott Hamilton’s relentless grin?  Oksana Baiul’s smeary eye makeup?  Anyone skating as a cartoon character in a giant, plush head?  Even Blades of Glory couldn’t match the reality of skating snark.

Or the drama, when handsome Sergei Grinkov dropped lovely Ekaterina Gordeeva on her head and how she persevered in her career after his untimely death.  Or Rudy Galindo came out as gay.  (Well, maybe that wasn’t such a surprise.)  And, twenty years later, they still dredge up the drama of Nancy Kerrigan vs. what’s her name. (I refuse to name her; she’s had enough undeserved fame.)

Now, figure skating is everywhere, even in the summer.  I’ve been casually watching this “Grand Prix” competition (when the Ravens aren’t on), where they travel each week from country to country, competing.  It seems like overkill to me.  Too many injuries.  I miss the skill of compulsory figures that gives the sport its name.  I hate seeing skaters so worried about not completing quad jumps (men) or triple axels (women) that they can’t complete a clean program of grace and skill.  Falling is rarely entertaining, even on America’s Funniest Videos.

The music has become a snooze fest.  The other day, two Japanese skaters competed to the same music from Phantom of the Opera, because, according to the commentators, the music is wildly popular in Japan.  Even I can’t listen to Moonlight Sonata, Waltz of the Flowers, or a montage from Carmen any more without wanting to throw something at the television.  Bolero always makes me think of Torvill and Dean, the hottest couple ever to do anything on the ice.  The music should be retired.  No one will ever use it better than they did.

DATE UPDATE:  Through match.com, I have a date this Thursday with a witty, intelligent man who suggested a really nice restaurant.  Lucky me!  Fingers-crossed that I have a good time.  (I know better than to start looking at wedding invitations.)  Plus, I see that the two men who never confirmed dates with me continue to check my profile.  Not sure what this means or if one of them is worth it, but, we’ll see.

At the suggestion of a friend, on Saturday, I ventured into Our Time, the sister site of match.com for people over 50.  Using the same profile and photos, I have been deluged with messages and “flirts”.  I dislike it because it doesn’t weed out the atheists and smokers in advance, which makes it trickier to read the profiles.  On the other hand, there have been some different prospects (and some the same).  And I may have accidentally shown interest in the ex of someone I know.  That’s a new dating dilemma.

Within hours of joining Our Time, about 1/3 of the messages that I received were from people with no photos.  Everyone who dabbles in online dating knows that you don’t respond to people who don’t post photos. We savvy online daters can tell a lot from a photo.  For instance, if you look like and claim to be college professor Alistair Winthrop, Ph.D., but write like a non-native speaker of English, I’m gonna delete you.  Likewise, if you have no picture or if parts of your profile are unanswered, I’m gonna skip right over you.

Unfortunately, my would-be stalker also found me at Our Time.  No, my life isn’t dramatic enough, I have a would-be stalker.  He first sent me a bizarre “secret admirer” note last year with his telephone number.  When The Daughter and I googled it, we were shocked to see that we knew him…and we know his wife!  On the advice of my attorneys and of law enforcement, I ignored it.  He wasn’t threatening, just needy, but that’s not my responsibility.  I added him to my prayer list.

Apparently, he was one of the “Mr. No-Profile Photos” that I had deleted on Sunday.  Without identifying himself, he messaged his disappointment to me yesterday, using my first name.  Now, if you’ve ever watched Dr. Phil or have two brain cells to rub together, you know that you never use any part of your real name or address in your profile.  Therefore, my dear Watson, it was elementary to me who it was.  His profile confirmed it, so I took a screen shot of it.

Since I was reading it on my phone, I had to wait to get home to block him.  Several hours later, his profile had disappeared, and the site’s security division says that, while they retain impressions of everything that occurs on their site, they are unable to prevent him from contacting me in the future.  This is why you never give people on these sites your last name, address, personal email address or telephone number.

Well, ladies who follow my blog, don’t worry about your husbands, who aren’t the kind who would be sneaking around on internet dating sites.  And if they were, I respect you enough to warn you.  On the other hand, if you don’t want to know, drop me a note.  In any event, rest assured that I am not interested in any more drama than I already have, so I’ll let them down gently.

This is a different kind of Cold War.  Maybe I should rustle up my own WMD.  I’ve been told that you’re guaranteed to hit something with a shotgun.  So, who am I to complain?  Life is good (mostly).  Soli Deo Gloria!