As open and loving and nurturing as my parents were, we never had any pets, which is probably just as well, because we couldn’t keep goldfish alive.  My only childhood experiences with dogs were a neighbor’s biting boxer that was kept on a chain and a little mutt that one of the neighborhood boys used to sic on me when I walked past his house.  (You know, boys are soooo mean!)

In dating The Veterinarian, I hit the weird pet jackpot.  His indulgent parents not only had a sweet collie, but they allowed him to keep snakes, turtles, rats, mice (guess what they were for), a tegu lizard, and a spider monkey that had been known to swing from the dining room chandelier.  His interest in veterinary medicine began when he was unable to find a doctor who could/would treat them.  I was eager to keep them all at arm’s length.

When we’d only been married for a week, without checking with me, my bridegroom took in a stray dog, a 14-pound Shetland Sheepdog.  I was completely freaked out and convinced that she was waiting for me to fall asleep so she could rip out my throat. Instead, she would sit at my feet, looking at me with a perpetually dazed expression in her enormous brown eyes and ripped out the arms of the loveseat that my mother-in-law loaned us.

In 1973, my young husband and a friend were accepted into veterinary school.  Spouses of the new students were invited to the “New Student Spouses Tea” at the home of the dean and his wife by the wives of the other deans and faculty members, a quaint custom that surely doesn’t happen in this 21st liberated century.  Most veterinary students are now women, and I doubt if any of their spouses/significant others are comfortable, not to mention willing, to sit on little, straight-backed chairs balancing delicate china and hot tea on their laps.  Unless they’re Downton Abbey fans, of course.

Late one afternoon, our friend’s wife and I drove over to the dean’s house together.  I was barely 21, the youngest woman there.  Many of the new students were veterans of Viet Nam, and some even had multiple children.  My friend’s husband was a Navy vet vet student [great alliteration, eh?].  Knowing none of the other women, we sat together as the presentation portion of the program began.

“We are all so happy to welcome our newest families,” Mrs. Dean began in her soft, southern drawl, always a classy sound way, way north of the Mason-Dixon Line.  “We want to get to know you better, so we’re going to go around the room and introduce ourselves. Please give your name, what you do, and tell us something about you that no one will forget.”

“What should I say?”  My friend whispered.

“Well, it’s the most memorable thing about me.”  Had there been an empty chair, she would have steered clear of me.  Guilt by association is always a painful thing.

We listened as the wwivves each described their admirable jobs as teachers, nurses, researchers, librarians, and managers, citing their interests in “knitting,” “being from Ohio,” “reading,” or “camping.”  Then, it was my turn.

“My name is Suzanne, and I have been married for less than a year.  I’m a full-time English major and just finished my junior year here at the university.” I very briefly hesitated, as if I were racking my feeble brain for a thought, “And…um… the most interesting thing I can tell you about me is that I don’t really much care for animals.”  I shrugged and crinkled my face in apology.

There was dead silence, a stunned “Did she really say that?” silence.  Then, there was polite laughter, and they moved on to the remaining women.  No one else launched a missile as explosive as “Gee, animal lovers, I don’t relate to animals,” but, as we stood to say our good-byes, women rushed over to ask me if I was serious.

“I didn’t grow up with pets and am very uncomfortable around them.  We have a dog, but I’m still not sure she’s not going to attack me at any moment.”

“What kind of dog, dear?” A faculty wife asked.

“A Sheltie?”  There was more laughter.  “But Shelties don’t bite.  I thought you meant a Doberman.”

I shrugged.  My friend was standing off to one side looking mortified.  In fairness, my friend has put up with my nonsense for 42 years.  In fact, she, her Veterinarian, and I are going on vacation together next month.  But, I’ll tell you what.  No one ever forgot me, and, when the class graduated, I was awarded the “Outstanding Wife Award”, given by the Auxiliary to the American Veterinary Medical Association.  It’s a pretty little silver Revere bowl with my name engraved on it. They gave it to me because I wrote the class newsletter for three years, which is more than I get for writing this crappy blog.  I bet they don’t give the “Outstanding Wife Award” any more, either.

Veterinary medicine has been very, very, very good to me.  I’ve made hundreds of friends around the world, veterinarians, spouses, clients, and countless others in the veterinary industry.  I’ve also heard and seen the most disgusting things imaginable, usually during a fine meal in an expensive restaurant, with other diners staring, open-mouthed, in the background.  Veterinarians just can’t leave their work in the office.

Ever eaten lunch with a dead a cow?  I have.  Ever seen a dog whose owners, high on God-only-knows-what, tried to cut off its tail with a kitchen knife?  I have.  Ever seen an owl puke up a pellet?  I have.  Ever seen warbles wriggle under the skin of a rabbit?  I have.  Ever had a great blue heron try to spear your eyeball with its beak?  I have.  Ever seen an eight-foot long python relieve itself and fling it all over the exam room?  I have.  Ever had to throw a deranged woman out of your clinic because she wanted the doctor to collect semen from her vicious dog, who had just bitten the doctor before said activity could take place, so she could breed it to her even more vicious bitch?  I have, AND I tacked on a huge surcharge to her bill for bringing them in for such a stupid undertaking.  As the Veterinarian (who was not present during the visit) told her when she complained, “You have no business breeding these vicious dogs, and we’re not going to help you do it.”  Hard to know who the real bitch was. 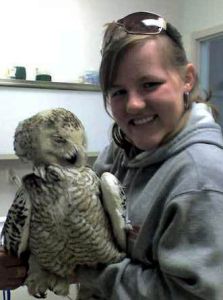 The Daughter meets Hedwig in the clinic. Hedwig recovered and was later released.

I’ve also held a bald eagle more than once (they’re surprisingly heavy), helped deliver puppies by C-section in the middle of the night (frequently), watched a dog’s heart beat in its open chest (more than once), seen many a joyous family reunited with a blocked cat they thought was a goner, and watched countless parrot chicks peck their way out a shell.  And how many brownie points can you earn by letting The Daughter hold one of your patients, a (sedated) real-life version of Harry Potter’s beloved snowy owl, Hedwig?  The poor thing had flown off course and ended up, malnourished, on a pier in Baltimore Harbor…the owl, that is.  The Daughter remains on course as of this writing.

I’ve had some interesting conversations with a man I met online who teaches communication.  I actually invited him to read a good chunk of this blog, and he didn’t flinch!  As far as I can tell, he doesn’t think I’m insane.  I, on the other hand, am not so sure.  Read on.

Someone emailed me that he does “informal portrait photography as a hobby” and called my really tasteful profile photo “a terrific image.”  In his profile, he says that he enjoys “photographing freaks and hipsters at local festivals.”   Can’t he see that I’m “Outstanding Wife” material? Maybe he follows the blog.

The goofiest profile photo was of a garbage can with a duffle bag arranged over one side so that an American flag decal was displayed prominently.  In the lower right-hand corner, you can see what appears to be a man’s shoulder in a fluorescent green T-shirt and a human ear. That’s it.  No face. Maybe he should meet the portrait photographer.

The creepiest profile photo appears to be an 80-year old woman in an embroidered peasant blouse and the profile name “viciousprez.”  The written profile says he is 62 and a “widow/widower,” “athletic and toned,” last read “Holy Bible,” and “For Fun” he says, “I have two sides.”  Honey, that’s what bothers me.  In “Additional Photos,” he shows a couple shots of an attractive gray-haired man with his arms around the waist of a pretty blond and two more photos of the older lady.   I wrote, “All right, I have no sense and just have to ask.  What is going on in your profile?”  No one ever answers my emails, so I will probably never find out.  If I do, you’ll be the first to know.

But my absolute favorite was the photo of a 50-year old man who looked a lot like The Veterinarian did at 50.  I was stunned and took a closer look, not because in my wildest dreams do I think a 50-year old man would be interested in me, but because, in the selfie, taken behind the wheel of a car, my late husband’s doppelgänger is wearing a gold band on the third finger of his left hand.  I kid you not.  If I was braver, I would have saved the image and posted it here for all the world to see.  Maybe it is The Veterinarian’s doppelgänger, or more accurately, his zombie, because, certainly, a man who posts a selfie of himself wearing a wedding ring on a dating site is brainless.

A friend at church asked me if online dating is safe.  I told him much the same thing that I have written here and showed him a “like” that I had just received.  It showed a slight, obviously young (20-ish) man who described himself as a “54-year old former marine.”

“You can tell he’s a fake, right?”  I asked.  My friend was incredulous.

It’s time to update my own profile, I guess.  I’m going to polish up that tarnished Revere bowl and take a selfie of myself with it to prove that I’m certifiable.  So, who am I to complain?  Life is good (mostly).  Soli Deo Gloria!

2 thoughts on “All Creatures Great and Small and Online”