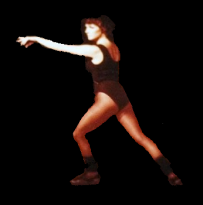 I have been a ham for as long as I can recall.  I love to make people smile, primarily because smiling people are forgiving people.  I learned early on that I could get away with a lot if people were laughing with me.  I was small and skinny, couldn’t run fast, hated sports, and didn’t much care for the great outdoors.

When I was four, I was on Detroit’s version of Romper Room for two weeks (and have the home movies and a “graduation” ring to prove it).  I was the kid chosen to narrate plays and stories.  I danced around my living room in self-crafted tutus for the family movie camera.  I turned vocabulary assignments into poems.  I wrote stories about turkeys who couldn’t gobble and girl detectives.  I made puppets out of wooden spoons.  I organized neighborhood plays and talent shows.  I sang in Easter bonnets made out of paper plates and purple netting.  I played a Munchkin in the “Wizard of Oz” and painted sets and made costumes.

I was in a student film playing a cog in a machine.  In one graduate level theater course, for an assignment on the cycle of life, I even wrote a scene in which I, with my fellow actors, played salmon struggling upstream to spawn.  In two different productions of “Cat on a Hot Tin Roof,” I spent the entire first act wearing nothing but a slip.  In a production of “Lend Me a Tenor,” I spent another 15 minutes wearing nothing but a teddy, playing a nymphomaniacal soprano.  In fact, I have done everything legal or moral on a stage, acting, singing, dancing, playing the violin, from garages in my hometown to Carnegie Hall.

Make no mistake about it, I have a keen sense of propriety, unless I’m near a stage.  When I began singing with the Deer Creek Chorale, My Mother commented on a performance by her 60-year old daughter, “After all these years, you’re still the one in the front row hamming it up.”

Yep, that’s me.  All the world’s a stage.  The arts tell us who we are as people, as human beings.  They provide glimpses into parts of our world that we might never encounter.  They comment on human nature, good and bad.  As my conservative father once said about a controversial play in which I was appearing, “These [characters] may not be the people we know, but they certainly exist, and it would be foolish not to try to understand them.”

After several starts and stops in the 30-some years that I have lived in Harford County, Maryland, we have a good chance of building an actual center for the arts.  No more rehearsing in drafty basements or performing in crowded churches.  A generous bequest of land started this current effort, and the county and the state of Maryland have agreed to support it financially, but first, the citizens have to raise several million dollars.

The Veterinarian and I already became charter members of the Center for the Arts, and, now, I have agreed to dance in their

annual fundraiser, Dancing for the Arts.  Sounds like a no-brainer for a woman who studied ballet, modern, and jazz into her early 40s, doesn’t it?  A no-brainer for a ham, right?  Well, consider that I have no cartilage left in either of my knees and have subluxated my hips once too often.  That evens the playing field right there, don’t you think?  With the help of the Deer Creek Chorale, I have committed to raising a minimum of $5,000 to support my fellow performing and visual artists.

Please visit my Dancing for the Arts page and put a smile on my face as I dance, yet again, in support of the arts.  As I say,