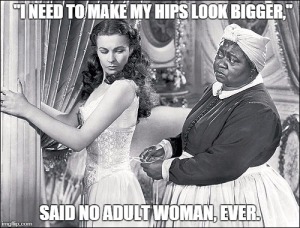 Scarlett and her personal assistant

This morning, The Daughter sent me an article about “waist trainers.”  Because she is a medical professional, it was an article using quotes from physicians debunking the latest fashion fad.  That’s right, you women who just got used to Spanx, corsets have been revived to give us an hour-glass shape, because — listen carefully — “men are attracted to women with hips.”

Pardon me while I put down my mug of sweetened tea and laugh myself silly.  I love to start my day with a good laugh!    If men are looking for women with big hips, then I’ve been highlighting the wrong body parts in my dating profile photos.

Although I’ve already written about accepting the girth of my hips (“How I learned to love my hips”) and the pudginess of my tummy, I just have to throw in two more cents’ worth of commentary.

This new lunacy is touted by those Krazy Kids in Calabasas, California who have turned their own questionable life-style into a national media frenzy.  Middle-aged women (including you, KKs), who already have enormous hips and thighs, are popularizing corsets to “train their waists and lose their pregnancy fat.”  As the physicians and nutritionists in the article rightly point out, and as any other middle-aged woman can tell you, you can stuff your gut into tight jeans and lay on the floor to get them zipped, but, when you stand up, there’s going to be a new roll of unpleasantness mocking you with the name “Muffin top” between your breasts and your waist.  It’s gotta go somewhere, above or below, but it ain’t going away, regardless of your age, your bank account, or your celebrity.

Why not just have some of your ribs removed?  That would be easier and, in the long run, way more comfortable.  Who needs those ribs, anyway?  They just protect vital internal organs that no one sees, a minor detail. When you squish your guts around, you impede your digestion, and  I don’t know about you, but I find acid reflux to be an unpleasant side effect.  The article also says that constricting your lungs makes breathing more difficult (duh), leading to pulmonary ailments.  This illustration from the Irish Examiner shows you better than I can tell you. 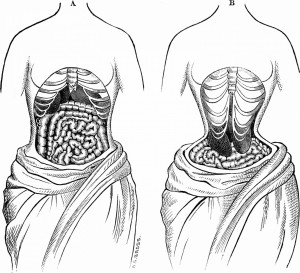 We get mixed messages from the media, don’t we?  On the one hand, they parade diet trends and unrealistic fashion standards before us, and, on the other, we are told not to criticize ourselves or others because we don’t fit these standards.  “Be the authentic you!”  They shout.  If I hear the words “authentic you” one more time, I’m going to show someone the “authentic me” and unleash World War III.

No, for the love of God, don’t be the authentic you.  Who I want to be or who I think I am is not necessarily who I should be.  I’m a shorter-than-average 63-year old woman who has a soft middle, regardless of the number of crunches that I do.  No waist trainer, no surgery of any kind is going to change that.  Should someone provide me with free Louboutin shoes because I think I would be happier if I were taller and more chic?   Should someone give me a television show because I think I’m the most fascinating woman in the world?  (Well, probably, since most everyone else has one.)

Fortunately, I surround myself with people who remind me to have some self-respect and dignity.  That I am not the center of any universe, including my own.  To be prayerful and introspective, to change the things that I should change and to accept the things that I cannot.  It’s called discernment, which I desperately need to practice, because my ideas can be pretty wacky, and that Shrew who lives in my head cannot be trusted.

Remember Scarlett O’Hara in Gone with the Wind, that politically incorrect classic about mid-19th century US history?  After Scarlett gave birth to her first child, she braced herself with her bedpost while her personal assistant (in this day and age, a more “pc” title than the character’s actual name) tightened her corset.  She was trying to regain her 18-1/2” waist, but the best that her “assistant” could manage to pull in was 20”.  A 20” waist…can you imagine?  Nope, I don’t think my waist has ever been that small.  I think it might have been 24″ when I was a 90-pound teenager, but that was so long ago, and my memory is so bad that I am most likely mistaken.  Which brings me to my point, as Scarlett’s personal assistant tells her, she has lost her girlish waist by having a child, by being a woman.  We are no longer girls, no matter how much we may look back fondly at a fleeting moment in our lives.  And I, for one, frankly don’t give a damn.

Yesterday, I read that Jerry Seinfeld and other comedians will no longer perform at college campuses because the academic environment is too “politically correct,” which seems to be a complete reversal of what was going on when I went to college.  In my day, we questioned everything.  Humor was used to examine life’s fallacies without condemnation.  Now, they condemn us if we don’t all think the same way.  And what “way” would that be?  Who is the new standard of perfection?  The vegan tri-athlete who says “anything goes, unless I don’t like it?”  The wildlife hunter who says “anything goes, unless I don’t like it?”

I think this is the problem with the online dating format.  Most people are trying to be inoffensive and end up saying nothing about themselves.  There is no nuance.  We present facts about ourselves by answering a series of questions, and, ironically, facts don’t tell us anything.  He’s short.  He has a motorcycle.  He likes to work out.  He likes to eat at home. He’s never going to tell you that he’s human and sometimes cranky or over eats or has bad knees or is sometimes too “tired” for sex.  I get that.  I, too, am unbelievably human and flawed, which is reflected in my written profile and undoubtedly why I haven’t had any luck.  I’m not selling an idealized vision of who I am.

Last week, I came across a perfect combination of honesty and self-aggrandizement, a man exactly my age, right down to the same birth month.  He claims to be an Ivy-league graduate, a professional by day and a musician by night.  His profile photo shows a good-looking middle-aged man with mirrored shades and a hipster haircut, and other photos show him with his colleagues in business attire, playing with his band in t-shirt and jeans, and several more where he is surrounded by glamorous young women.  I was amused and perplexed and intrigued.  Who is this guy?  Not, his name, but what kind of human is he?

He says he’s looking for an “adult relationship” with someone who “gets the concept of ‘living in the moment’ [sic]” and discourages women who are separated or are aged 25-30 and looking for someone “35-85 within 2500 miles.”  I looked at the age preferences of this 63-year old man…”42-50 within 25 miles.”  I burst out laughing and wrote to him, “Is this profile for real, or is it a parody?”  I wasn’t looking for an answer, but I just can’t believe he’s for real, no matter how literate and hilarious his profile may be.  He’s probably looking for a woman who uses a waist trainer.

Now that I reconsider the matter of personal authenticity, I hope my next date does bring his “authentic self” along when we first meet.  I don’t want any surprises, and I reserve the right to determine if his “authentic self” doesn’t match my values and standards, which, after all, make up my authentic self and are every bit as valid as his.

We all want to be loved just the way we are.  Your waist may be smaller than mine.  Your hips may be bigger.  Your fashion sense or taste in men may differ.  I may disagree with you, but I will love you.  And if you don’t love me back, that’s ok, too.  I have my own friends, so who am I to complain?  Life is good (mostly).  Soli Deo Gloria!