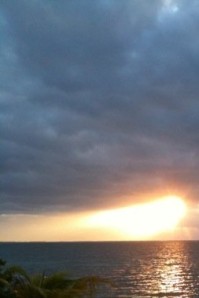 We need a little hope, right this very minute.  This morning’s media reports (print, broadcast, and you, my friends on social media) ran the emotional gamut from despair (Robin Williams) to generosity (the Ice Bucket Challenge to benefit ALS research). Since I claim that this blog is “about hope,” I jettisoned my originally scheduled post on my love/hate relationship with dogs for the brand of hope that has floated my boat through the crises of my life.

Turn away now, if discussions of faith offend you.  Stay with me, if you’re curious.

In his letter to the believers (and non-believers) in Rome, St. Paul writes “…And we boast in the hope of the glory of God.  Not only so, but we also glory in our sufferings, because we know that suffering produces perseverance; perseverance, character; and character, hope.  And hope does not put us to shame, because God’s love has been poured out into our hearts through the Holy Spirit, who has been given to us.[1]” [Romans 5:2c-5]

Elsewhere, the news is grim.  Ebola kills.  Racism kills.  Greed kills.  Fear kills.  Despair kills.  Thus it has ever been for humankind, since recorded history began.  Check out cave paintings and Gilgamesh and the Bible and the great writers of every civilization on every point of land on Earth. The Mesopotamia flooded, and typhoons and tornadoes, earthquakes and blizzards threatened creation every year.  Plagues and insects killed creation every year.  Feudal, tribal, and personal disputes killed, maimed, and injured creation every year.  No amount of rationalization or evolution or legislation changed it.

Still, humans search for solutions and, in the process, tend the sick, bless the dying, soothe the suffering, and pity the afflicted (to paraphrase a prayer from the Episcopal Church’s Order for Compline).  Whether I need to say something to God or not, I talk to God every day; whether things are going great or if I’m dealing with my own fears or those of others.  There is hope every day, as God provides the answers for the problems that seem insurmountable.  They rarely are the answers that I anticipate, but I am moving forward.  So, who am I to complain?  Life is good (mostly.)  Soli Deo Gloria!

Lord, make me an instrument of your peace.

Where there is hatred, let me sow love;

Grant that I may not so much seek to be consoled as to console;

to be understood as to understand; to be loved as to love.

and it is in dying that we are born to eternal life. Amen.