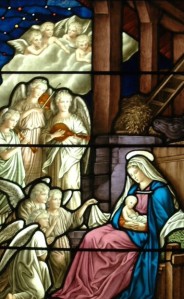 that animals should see the new-born Lord,

lying in a manger!

Blessed is the Virgin whose womb

was worthy to bear

Tonight, we come to the second greatest event in Christendom, the birth of Jesus.  Some will consider me an apologist for God, purveyor of myth (in the true meaning of a myth, I am), childlike (yep), superstitious (never), or simply irrational (sometimes).   Some may say that Christians have co-opted other traditions (syncretism), commercialized a sacred belief (agreed), and/or persecuted those who aren’t “believers” (regrettably).  But on this night, all I can see is the hope lying in a modest dwelling, not in a palace or floating on a yacht or drifting magically through the sky.  The baby is human and real and vulnerable and generating the love and peace and hope that we appear, at first glance, to have so little of.  It is the great mystery. It’s a gift.  It’s irresistible.  Seize it.

O Magnum Mysterium, from the Matins said by the Church at Christmas, comes as close to expressing how I feel about Jesus’ birth as anything I’ve read or recited or sung.  Two musical settings, written 400 years apart, particularly convey the mystery. The elder was written by the 16th century Spanish composer Tomás Luis de Victoria and the more contemporary (1994) by American composer Morten Lauridsen.  Both are a joy to experience as a singer, the harmonies, dynamics, and movements telling the story as much as the words do.   Listen to the simple, ancient words in any of the fine versions on YouTube.

When caroling with friends, visiting shut-ins, or even singing in the bar of an upscale tavern, as much as we bring the good news of Jesus’ birth to our community, we share our own joy with one another.  At one stop, we were even joined by a kennel full of foxhounds howling along (no, it wasn’t someone singing out of tune).  In the clear, cold sky, Orion made his winter appearance, just as he did on that holy night.  Same stars.  Same creation.   Same love.  Same hope.

On Christmas Eve, as I sing with these same friends in the choir at the 265-year old church where I worship regularly, I will face this beautiful window.  Floodlights outside will illuminate God’s beloved creation.  The animals will breathe comfort. The angels will shine gloriously. Mary and her baby will glow.  The mystery will be clear.

Inside, the lights will dim when we sing “Silent Night” as the Eucharist ends, and most eyes will be damp.  What moves us?  Sorrow?  Dementia?  Hallucination?  An evolutionary, even reptilian, reaction to sound waves?  It’s a mystery.  The Eucharist itself foretells the greatest event in Christendom that we will observe in a few short months.  Another mystery. More improbability.  More irrationality.  More hope.

All of these mysteries engender love and peace and hope, if we embrace them.  It doesn’t mean that we put down our intellect or our reason.  It doesn’t mean that we dominate others.  All earthly life is messy.  Scripture does not promise us otherwise.  It promises that, in all the messiness of sin and pain and sorrow, God will continue to send that love and peace and hope that heals and sustains us. Gloria in excelsis!

As I age, I learn that I don’t need an explanation for everything that happens.  I know the nuts and bolts of life, the tools of physical survival, but the unmeasurable part of me, my faith, lifts me when I cannot lift myself.  How does faith work?  It’s a mystery, but to me, it’s very rational.  Like planking, which strengthens my physical core, I work on it.  As I work at staying in touch with friends, I work at staying in touch with God through prayer and study and fellowship and evangelism and stewardship, all of which are concrete and very real.  Frequently, I fall, but others, who also see the mystery, are there to help me upward and onward.  We are God’s gifts to one another.  We are God’s love and peace and hope.  So, who am I to complain?  Life is good (mostly).  Soli Deo Gloria!

Don’t be shocked to see another post from me within 24 hours.  I’m trying something new.  Something extra.  Trying to fulfill that “hope” business.

Morning prayer is so much clearer when watching the sun rise out 0f the ocean.  Where could Lenten discipline possibly be in such a beautiful site?  By practicing discipline, of course.  By reflecting on what is before me.  By paying attention when I’d rather be sleeping in or zoning out.  An email from home reminds me that God is redeeming my headache in God’s way, on God’s time.  There’s always time for thankfulness and praise.

I am visiting with old friends, those dear people to whom I fed the splinter-laden cheesecake 42 years ago.  On our first night together, we shared a store-bought rotisserie-roasted chicken and fresh asparagus with a bottle of pinot noir.  Nary a splinter in sight, a lifetime away from an apartment over a garage.  I am thankful.

Last night, it was bittersweet to sit down at a table with just the three of us, the fourth chair empty, as if waiting for Elijah to pop in and join us at any moment.  Like Elijah, The Veterinarian’s spirit hovered in this place that he loved and in the stories that we told, but there were also new stories, as we have each moved on to new adventures and new bottles of wine.  I would say “Hallelujah,” but we don’t say “Hallelujah!” in Lent, so I’ll just whisper, “Woohoo, Lord!”

This morning, we’re making French toast from last night’s leftover bread and wondering what the day will reveal once we deal with a problem in earthly Paradise.    There’s a screw stuck in the rental Mini-Cooper’s tire, which must be resolved before we can take off.  I’m the tour guide.  Do we search for blue iguanas?  White sands?  The sun is shining; the breeze is warm; and the dive boats have gone out.  Something wonderful will be revealed today, as it is every day, if I just look.

We need a little hope, right this very minute.  This morning’s media reports (print, broadcast, and you, my friends on social media) ran the emotional gamut from despair (Robin Williams) to generosity (the Ice Bucket Challenge to benefit ALS research). Since I claim that this blog is “about hope,” I jettisoned my originally scheduled post on my love/hate relationship with dogs for the brand of hope that has floated my boat through the crises of my life.

Turn away now, if discussions of faith offend you.  Stay with me, if you’re curious.

In his letter to the believers (and non-believers) in Rome, St. Paul writes “…And we boast in the hope of the glory of God.  Not only so, but we also glory in our sufferings, because we know that suffering produces perseverance; perseverance, character; and character, hope.  And hope does not put us to shame, because God’s love has been poured out into our hearts through the Holy Spirit, who has been given to us.[1]” [Romans 5:2c-5]

Elsewhere, the news is grim.  Ebola kills.  Racism kills.  Greed kills.  Fear kills.  Despair kills.  Thus it has ever been for humankind, since recorded history began.  Check out cave paintings and Gilgamesh and the Bible and the great writers of every civilization on every point of land on Earth. The Mesopotamia flooded, and typhoons and tornadoes, earthquakes and blizzards threatened creation every year.  Plagues and insects killed creation every year.  Feudal, tribal, and personal disputes killed, maimed, and injured creation every year.  No amount of rationalization or evolution or legislation changed it.

Still, humans search for solutions and, in the process, tend the sick, bless the dying, soothe the suffering, and pity the afflicted (to paraphrase a prayer from the Episcopal Church’s Order for Compline).  Whether I need to say something to God or not, I talk to God every day; whether things are going great or if I’m dealing with my own fears or those of others.  There is hope every day, as God provides the answers for the problems that seem insurmountable.  They rarely are the answers that I anticipate, but I am moving forward.  So, who am I to complain?  Life is good (mostly.)  Soli Deo Gloria!

Lord, make me an instrument of your peace.

Where there is hatred, let me sow love;

Grant that I may not so much seek to be consoled as to console;

to be understood as to understand; to be loved as to love.

and it is in dying that we are born to eternal life. Amen.