Yesterday, Punxsutawney Phil and his family of groundhogs saw their shadows, and at least one, in Sun Prairie, Wisconsin, took a chunk out of the mayor’s ear.  On Wisconsin!  I don’t blame them.  I also have a tendency to snap at the ears of anyone who wakes me up in the middle of a deep sleep for no apparent reason.  You can understand that the groundhogs would be grouchy, because they don’t have much longer to hibernate before they awaken to chew on grass and start dodging cars and lawnmowers.  If it’s any consolation, by my calculations, there are six and a half more weeks until the spring equinox, so that’s four fewer days of winter. Not a boon, not a calamity.  On the brighter side (pun intended), the days are already longer, and daylight savings time starts again on March 8.

My maternal ancestors settled eastern Kentucky, so you would think my grandmother would have been a wealth of folklore about animals, but her expertise was more in folk medicine, along the lines of  “If you swallow gum, it will stick to your ribs.”  Here are my anecdotal observations about the true nature of winter:

If my forsythia bloom on a rare, warm day in December, they will also bloom in February and March.  Forsythia are like weeds, not deterred by anything, and those yellow flowers are really pretty when covered by layers of ice.

If my snowdrops bloom in February, there will be a snowstorm blanketing them, and I won’t see them until it thaws, and they have died.  Indeed, they have just broken their little heads above-ground, and while I fear for their safety, it means that spring is on its way. 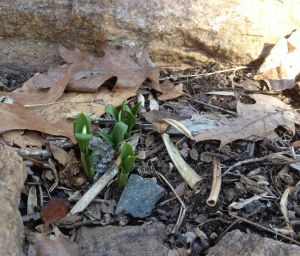 If a snow event fails to materialize on a Friday or Monday, schools will close anyway, and every kid will be at the mall.

If I am away in the winter, the deer will take over my yard and eat everything green in sight.  I lost some azaleas last week, while their nemesis, My BFF, was boarding, and I, so irresponsible, was frolicking in the tropics.

If I top-off my windshield washer fluid on January 1, it will disappear by February, when I really need it.

If I keep a shovel and a bucket of sand and salt in my trunk, my steep lane won’t freeze all winter, but I will curse every time I try to load groceries.

If I wear my dress shoes to church, there will be unavoidable ice somewhere between my car and the door to the sanctuary.

If you put out a squirrel-proof bird feeder, you’re only providing entertainment for the squirrels. They already socked away a million acorns last fall and don’t need the seed. I stopped using a particular feeder, after I saw the squirrels learn to sit on top of it and smack the release lever with their paws to drop seed to their little squirrel friends on the ground.  After a few minutes, they would switch places.  The birds just sat nearby watching the circus.  At least, everyone was entertained.

Valentine’s Day is imminent, so there must be some serious pheromones being carried by all of these blizzards.  I have been inundated with “winks,” “interesteds,” and emails.  Where do I start with this week’s dating prospects?  The atheist?  The 33-year old from Connecticut?  The 83-year old from Ohio?

Let’s start with Mr. “Hey, Ms. Fallston, Read my profile.  I think you will get a good lush hot two. [signed] The Prince of. [local housing development].”

If “lush hot two” is something pornographic, I apologize, but that’s an expression that I’ve neither heard nor can decipher with my superb command of the English language.  This was his second email.  His first asked if I had ever been dancing at a local, somewhat disreputable, establishment.  I was a little taken aback, so I ignored it, per online dating custom.   The second email was so pathetic that I just clicked “Not interested” and blocked him, which I have only done twice before.  Shouting at me does not a good first impression make, and he’s the first guy I thought might feel compelled to continue the diatribe.

Then, there was this email, “How Can I Become your ‘Undercover’ Cuddle Buddy and More!!” [sic] from a 46-year old man in northern Virginia with a zany photo reminiscent of a 1950s Vegas comedian.  He was commenting on the photo of me in a straw hat and sunglasses that was taken on my vacation (see last week’s blog post).  I hope he means “undercover,” as in a disguise.  The Daughter assured me that it was a tasteful, ladylike photo, but maybe there’s too much cleavage.  Uh-oh.  Maybe that’s responsible for the uptick in contacts.  False advertising.  Not the cleavage, by the way.  What the cleavage may imply.

I received an “Interested” from a man who just moved to the area and has an interesting job.  I returned to him an “Interested.”  He’s divorced with “no baggage, never argue, criticize or condemn.  Am totally supportive and never sarcastic.”  Oh, come on.  Everyone has some sort of baggage.  Mine tends to be lightweight and expensive.  I certainly never condemn and was always very supportive of most every inane thing that The Veterinarian ever did.  “Argue and criticize?”  Only when I’m 100% absolutely, certainly, clearly, definitely, and undoubtedly right.  OK, we probably don’t have chemistry, but I’m fascinated by his job and may just email him about it.

I emailed a self-described “Christ-centered” guy, aged 60, looking for women 38-54, who said he worked for the government in “health” and “nature” with a “graduate degree.”  He posted a photo of himself expertly holding a raptor, so I asked if interacting with Great Horned Owls was part of his job (seeing as how I know a boatload of stuff about raptors and medicine, thanks to The Veterinarian).  I realize that I am two years older than he is, and eight years older than his ideal, but, still, I thought we might have something in common.  My profile shows my serious commitment to Christian Formation, but perhaps I missed Christ’s admonition on dating outside of your ideal age range.  (Sorry for the sarcasm.)

My stated “ideal age” is 55-68, but I’ve corresponded with 72 year olds, because, after all, Paul McCartney and Harrison Ford are 72.  If they’re much older, they’re too close to my parents’ generation.  If they’re younger than 55, well, that’s flattering, but I’m no cougar, and George Clooney went off the market last fall.  I would consider a younger man with bad eyesight, because my dilemma is that I can no longer dress or undress in the dark and probably wouldn’t stand up to scrutiny in the harsh light of day or those new compact fluorescent bulbs.  I know that my neck won’t.

My bigger fear is that I am “geographically undesirable.”  I’m not close enough to a major city.  The really interesting guys all seem to live in the DC area, about 40 miles away, which is probably not a deterrent, if you live in the vastness of Texas or own a car and know how to drive.  (In one of my profile incarnations, I said that I own a car and know how to use it and am not navigationally impaired.)  I’m regularly contacted by men from 33-83 from Maryland to California.  Beyond 100 miles, I wouldn’t even respond to them, because they are, most likely, either fakes or psycho killers.

Of course, My Mother fears that they’re all psycho killers because she watches all the real-life crime dramas on Friday and Saturday nights.  I watch Dr. Phil and have learned to spot the fakes a mile away.  I always have hope.  After all, despite what cranky groundhogs say, spring is on its way!  So, who am I to complain?  Life is good (mostly).  Soli Deo Gloria!