What have they done to toilet paper rolls?  Paper towel rolls seem to get bigger and bigger and barely fit on the spindle of my paper towel holder.   You can get extra shampoo in a humongous bottle.  However, you have to scrape for scraps of toilet paper in the middle of the night, when it runs out unexpectedly and you can’t find the box of Kleenex in the dark. 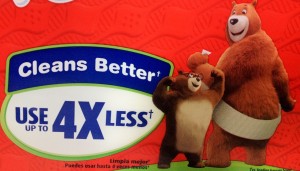 Do they just not care that I know the rolls are smaller?

I use more rolls now than I did when The Veterinarian lived with me.  That’s crazy for one little woman, using just three sheets at a time (yes, I count).  I’m not draping it around the neighborhood.  I’m not wrapping presents with it.  My BFF Fiona isn’t unrolling it (it’s not challenging enough for her; she prefers Kleenex, paper towels, and socks).  There should be plenty in my house.  I’m not flushing that many stink bugs away.

When shopping, I look at the size of the cardboard roll, compare the number of sheets per roll, and still go through two rolls each week.  Rolls are narrower, too.  A decade ago, a full roll of toilet paper barely fit the width of my holders.  Now, it flops loosely like a belt on a supermodel. And the word “toilet” does not appear on the packaging, so, I guess that a bear wiping its behind with the tissue is more acceptable.

And while I’m on a rant…

Unfortunately, we do notice.  They can change the package’s shape or the label, but we can see it when we open the can and feel it when we pick up the box.  The games manufacturers play.

Take cereal.  (Please, take it.  I don’t eat cereal.  If I must eat breakfast, I want it hot, not icy cold.)  Why are the boxes of all the fiber-heavy stuff so much smaller in size and denser than the Frosted Flakes, Special K, and Honey-Nut Cheerios?  And why are they more expensive?  They’re all just cardboard-y grains, aren’t they?  Metamucil comes in a little capsule.  Why does bran come in a box?  Why does oatmeal come in a round box that doesn’t fit on the shelf with other boxes?

And that brings me to this…

Why don’t they sell fragrance-free deodorant in the warehouse stores?  I could smell like Degree’s Fresh Energy, Dove’s Cool Essentials, Sure Regular Scent, or Speed Stick’s Fresh Rush.  None of those “fragrances” is descriptive.  Yes, I would like a fresh rush but not from my deodorant.  I can’t begin to imagine what those things smell like, and I have a pretty wild imagination.  My favorite is Fresh Clean.  Huh?  Isn’t that nothing?  If you’re fresh and clean, you shouldn’t smell at all, should you?

My smoke detectors use 9-volt transistor batteries as back-ups when the power goes out.  And what else, nowadays, uses transistor batteries?  My portable radio operates on either solar cells or cranks to generate power in an emergency.  Remember transistor radios?  Remember the 80s when “boom boxes” used about $20 worth of D-cells?  The only thing that uses D-cells now is my Mag-Lite flashlight, which, when loaded, becomes a lethal weapon.

My digital camera uses a stubby lithium battery, but I have four different sizes of stubby batteries rolling around my battery box.  I have no idea where they go.   And why do I have so many C batteries?  I can’t find a single thing in or around my house that requires them.  They must have been purchased for a battery-operated toy at 4pm one Christmas Eve when we were desperate to ensure a merry Christmas morning memory.  The toy and its owner have moved on, but the batteries linger.

If I had been paying attention in my college physics class, I could probably become a billionaire by coming up with a solution to what must be a common dilemma.  Alas, I was not.  If you or anyone you know, comes up with a solution, please be sure to cut me in for 1% of the profits, which will be a mere drop in the bucket to you.  Then, get busy on the toilet paper problem, please.

After a relatively quiet spring, in the past 48 hours, the scammers have been out in force.  It’s the end of the month.  Maybe they have a quota to fulfill.  Herewith is the photographic evidence.  It may seem cruel to highlight these people, but I, in no way, imagine that they are sincere.  In fact, when I did a Google search of three of the profile photos, they turned up connected to the websites of legitimate professors and business men.  I’m gonna guess that men with advanced college degrees have better grammar.  One of the photos matched a photo from 2009 on a site that exposes scammers.  I sent the link to match.com when I reported it, but they haven’t blocked the guy yet.

I’m frequently sorry about my photos, too, but I don’t post them unless they’re mine.

He is not my prince, even if his profile says he’s “Executive Management.” 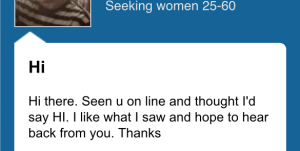 Probably not, especially since you’re wearing a striped jail costume.

These guys are deceptive enough to create the names of deodorants and packaging for toilet paper.  And I may not be smart enough to create a universal battery, but I do know deceit when I see it, so, who am I to complain?  Life is good (mostly).  Soli Deo Gloria!