It seems I actually may get to Cuba before I die, since the U.S. has resumed diplomatic relations with the largest nation in the Caribbean.  I’ve always wanted to see the pristine beaches and the incredible rain forest, the Spanish colonial architecture and the old American cars.  Oh!  And I can’t wait to bring home the rum.

When most people think of Cuba, they think of angry guys with beards, cigars, Cuban sandwiches, and rum.  I buy Havana Club rum when I’m in Grand Cayman to mix with Coca-Cola and a squeeze of lime.  It’s dark and rich with a hint of molasses, and the seven-year old sipping blend is about as smooth as some single-malts I’ve had.

One of those pristine beaches, near Santiago, provided the name for my favorite summer heat-quencher, the Daiquiri.  I’m talking about real Daiquiris made with limes, not that sickly sweet stuff that comes out of a mega-blender like a Slurpee.  In the early 20th century, legend says, some American engineers with a lot of time on their hands came up with the perfect antidote to the oppressive tropical heat.  It became popular in Havana’s bars and nightclubs, attracting the attention of Ernest Hemingway, no less, who inspired a variation, with grapefruit juice and maraschino liquid, that bears his name.

How a simply elegant drink became synonymous with strawberries or bananas and an avalanche of crushed ice, I’ll never know.  Over the years, whenever I’ve asked for a “lime” Daiquiri at a beachfront bar, the bartender has looked at me like I was nuts, until one day on Key Biscayne.

We were on vacation in south Florida in July.  That may sound like torture to you, but our Maryland beaches are darn hot and humid in the summer and more expensive than a luxury hotel in Miami, where it’s the off-season.  As we were sitting at the deserted pool, I begged the Veterinarian to surprise me with something icy-cold from the bar.  He returned with a plastic cup full of the most heavenly Daiquiri I’d ever had.

“The rooms may be cheap here in the summer, but the bar drinks are pretty stiff in more ways than one.”

They were so irresistible that I think we splurged on one more during our week’s stay, but when we returned home, we experimented until we came up with the perfect replica.  You have my permission to adjust this to suit your own taste, but you can’t use anything other than fresh lime juice or white rum.  Frozen limeade is too sweet.  Bottled lime juice is too bitter. Dark rum is just ugly in the glass.  Corn syrup is too thick. I’ve tried to use artificial sweetener, which mixes well in the icy rum and lime, but the sugar syrup makes a smoother drink.  You can add more syrup, if you’d like a sweeter drink, but it cuts the all-important thirst-quenching properties.

Juice of one freshly-squeezed lime

Measure rum and sugar syrup into shaker full of ice.  Squeeze in the juice of one lime.  Shake and serve over ice in tall glasses.  Garnish with lime wedge, if desired. 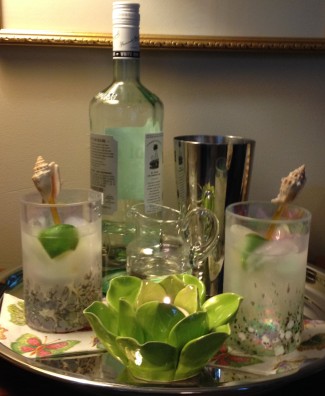 Place sugar in small, heavy saucepan over medium heat.  Stir in hot water until sugar is dissolved, and bring to a boil.  Reduce heat to low and simmer mixture for 15 minutes.  Cover tightly with a lid and remove from heat.  Let sit until room temperature.  Pour into clean glass jar and store in refrigerator until ready to use.

[Note:  Because the mixture is boiling when you cover it, it will stay sterile while it cools.  Do not lift the lid while it is cooling, and refrigerate promptly within 60 minutes.]