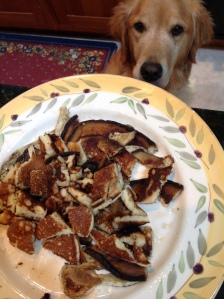 One of my most treasured possessions is a well-seasoned cast iron skillet that I inherited from my maternal grandmother, aka The Kentucky Grandmother.  In its 70+ years, it’s seen her fried chicken and fried green tomatoes and fried pork chops, as well as my fried roast beef hash and my not-fried shrimp etouffé.  It’s seen a lot of cornbread, as well as the lightest pancakes with the crispiest edges.  You can see this humble pan holding fancier fare, like Caramelized Salmon and Blackened Prime Rib in this blog.

The Daughter asked for her own well-seasoned cast iron skillet for her birthday.  Together, we chose an American-made skillet for $12.00 at T.J. Maxx.  I told her that I would start the seasoning job, but that a really smoothly coated skillet comes from years of use.  I was fortunate to receive Grandma’s, but, for a wedding present, a friend gave us a new cast iron skillet containing a Pineapple-upside-down Cake[i], which is almost quite-right after 43 years of use. 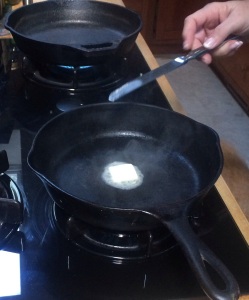 I started by wiping it with oil and heating it overnight in the oven at 300°.  I’ve been cooking everything in that pan since I bought it; bacon, potatoes, fish, hamburgers, and steak.  That’s right, I’ve been frying stuff that I have no business eating, but that’s what a good mother does for her child.  This morning, we’re going to make pancakes.

A treat of waking up at My Grandma’s house was smelling coffee percolating on the stove (remember that?) and coming downstairs to her lightweight pancakes with the crispy edges that only a hot skillet can produce.  I’m not talking crêpes.  I’m talking pancakes that she made from the traditional Aunt Jemima mix, doused with Log Cabin syrup.  Sure, anyone can buy the mix and pour it into a pan, but, after trial and error, I discovered how she achieved the light and crispy effect with extra milk and lots of butter.

In the opposite order of a usual recipe, I’m going to give you the technique first.  Be sure to turn on the exhaust fan, because there will be a lot of burning (ie, smoking) butter.

I always use two skillets, so I don’t spend all day making breakfast for other people and have no time to enjoy my own cooking.  Place them on the burners over medium-high heat and heat for two minutes.  Test the pan by placing one teaspoon of butter in the center of the skillet.  It should sizzle immediately and start to turn brown.  Run the butter over the entire bottom of the skillet, using more butter, if necessary, until thinly filmed.  To make pancakes, place another one teaspoon of butter in the center of the pan and immediately pour one cup of prepared batter into the center.  It will spread out into the butter, which gives you those crispy edges. 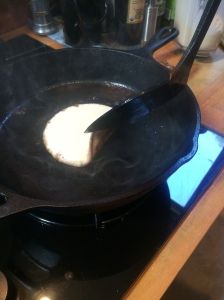 When the top of the pancake is covered in bubbles, lift one edge.  If it’s brown, carefully flip it over.  Because the batter is thin, it may run, so your results may not be picture perfect.  Because I don’t like fat pancakes, I also flatten them a little more with the turner before serving.

The first pancake is always a dud, which we call the “doggie” pancake and is always reserved for — well, nowadays — the BFF.

One day, I ran out of Aunt Jemima mix, got creative in the kitchen, and produced my own recipe, based on one from the classic Betty Crocker cookbook.  If you don’t count the copious amounts of butter in the pan, it’s mostly fat-free.    With the help of a little apple cider vinegar, I created the tang of buttermilk.  Now, it’s the only recipe that I use. 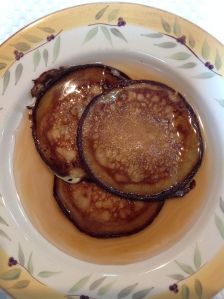 Lots and lots of salted butter

Pure maple syrup (I like the really dark kind.) 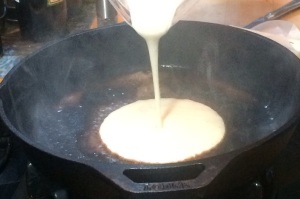 In a blender or mixing bowl with a spout, whisk together the milk, vinegar, and egg.  Mix in the flour, sugar, baking powder, baking soda, and salt until smooth.  The mixture should be the consistency of gravy.  If too thick, add a little milk.

[i] The Veterinarian wanted a Pineapple Upside-Down Cake for our wedding cake, which didn’t make any sense to My Mother, who, after all, was paying.