Now, I’ve missed Cyber Monday.  I’m probably missing some significant sales today, too.  The pressure is just horrendous for me to consume irrelevant stuff this time of year, but I will not succumb.  I don’t really need to, since my shopping list is blessedly short, but I find Christmas shopping a very dangerous opportunity to over-spend — mainly on me!

Should I fight someone for the last large-screen HD internet- and Bluetooth-ready television?  Until Verizon gets its act together and installs the Fios cable service tomorrow that I ordered last week and wasn’t installed on Friday, as scheduled, and wasn’t installed yesterday, as rescheduled, I have no need for one.  I’m not sure that I could wrestle one into my car.  The Daughter buys whatever she wants, when she wants it.  My Sister has a limited tolerance for electronics; My Mother, no tolerance of any kind.  That settles it.  No electronics.  No Hoverboards.  No Drones.  No Droids from “Star Wars.”

Should I knock over small children to get to the toy department?  The BFF is the only “child” in my household, and she’d rather have a nice, bark-covered stick to chew on than a Cabbage Patch Kid.  On second thought, she just might like to chow down on a CPK.  [Are CPKs making a comeback?  Target seems to think so.  They’re also advertising that creepy little Mario guy with the Burt Reynolds moustache.]

Walmart (where I’ve shopped only 3 times in my life; once in Florida for lint rollers, once on the Eastern Shore of Maryland for aluminum drip pans, and once nearby for a plush reindeer), suggests “Pokemon 2015 Trainer Kit Deck”  “2-Player Learn-to-Play Set”  “Now $8.99.  Was $9.98.  Save $0.99.”  Wow.  A whopping $0.99 savings. That would be worth driving around for 30 minutes trying to find a parking space.  I never would have bought that, because the description is ridiculous:  “Two 30-card decks, each with a specially selected foil card, two guided game booklets, 2-player playmat, damage counters and Special Condition markers, a game coin, an illustrated deck box, and a code card for the Pokemon TCG Online!”

Not one word of that description tells me anything.  It appears that in order to play this game, you have to spend a minimum of $8.99 (plus $6.95 shipping if you don’t either pick it up in the store or qualify for free shipping by buying another $41.01 worth of stuff, plus sales tax) to learn how to play the game and then buy the game itself.  Nope.  No way.

Then, there’s this little gem in the tights with her fanny hanging below her jacket.  Of course, what else but a hunk of molded polyvinylchloride could wear that outfit? 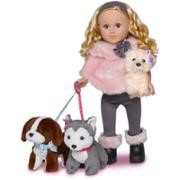 The puppies are cute, but “Pickup only”?  Yeah, kinda looks that way to me.  Maybe if she put on some pants, she could get a real job.  And they said Barbie was a tramp.

Where are Raggedy Ann and Andy with their soft bodies and embroidered hearts?  Where are the Lincoln Logs?  Doesn’t anyone want an electric train set?  Chinese Checkers?  The other day, someone,  obviously as old as I, asked what happened to Colorforms.  When I was a kid, they came in exciting shapes, like Batman and Star Trek and Barbie, and you put them into comic book-like scenes.  I bought the only set that I could find for The Daughter.  It was a huge set of basic shapes and colors organized in pages in a spiral notebook, and it was Very Expensive, sold through the catalog of the Metropolitan Museum of Art.  My 10-year old self was in heaven.  Hers was nonplussed. 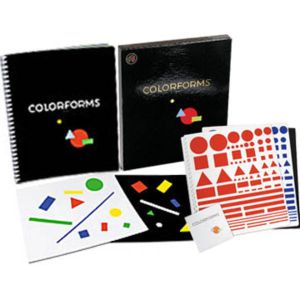 “Like, what do you do with these?” she asked.

“You make pictures on the shiny black board with them.”

“No, you arrange the shapes into pictures, with houses and people and pets and trees.  Anything.  You can tell stories with them.”

“I never understood the appeal of Colorforms, either,” The Veterinarian had the audacity to chime in.

“OK, fine,” I snapped, “they’ll just be mine, and I’ll lull myself to sleep with the boring Colorforms.”  I haven’t seen them since and couldn’t tell you what happened to them. I wish I could. They’re asking $25 on eBay for a well-worn, incomplete set or $75 at Amazon.com for a new set.

Should I spring for a white faux furry vest for The Daughter?  It’s kinda cute in a retro, Sonny-and-Cher way.  I’m just not sure what she wears these days when she isn’t wearing scrubs to work.  We always play a game when we’re in Target together.  We walk through the girls’ clothes, and I point at outfits and say, “I would have bought this for you.”

Sometimes, she’ll say, “Well, I wouldn’t have worn it” and counter with, “Would you have let me wear this?”

The answer to that one still is, invariably, “No.”  I’m not real fond of rhinestones, spandex, and bare midriffs in children’s clothing, unless they’re meant for the stage or the swimming pool.  Don’t like them on most adults, either, for that matter.

My shopping email inbox received 109 emails from Saturday to Monday evening.  I let them pile up so I could count them.  Most of them were from clothing stores, which is the most dangerous place of all to cyber-shop, but it’s also the most fun.  I choose the clothes (mostly for myself), put them in the “shopping cart” or “bag”, and go on to the next site.  I haven’t really purchased anything, but, somehow, my urge to acquire is satisfied.  I used to play this same game with catalogs, but cyber-window shopping is much more satisfying.

This morning, I heard a network broadcaster, on my small, non-internet-ready, Bluetoothless television, say that retailers use cookies to track when you have placed items in your cyber shopping cart but not completed a purchase.  He said that they will send you an email showing the item saying, “Did you forget about me?  I’m feeling rejected in the shopping cart.”  Oh, pull-eaze.  It’s bad enough that, when I walk into a mall, items scream “Buy me!”  “Buy me!” “You’ll be [choose as many as you want] taller, younger, hotter, thinner, __________ .”  (The shouting from Victoria’s Secret is especially annoying.)

Of course, actually shopping in a store is pretty dangerous, too.  I’m adept at dodging the model-wannabes trying to douse me with the latest celebrity fragrance.    On Monday night, around the dinner hour, I almost let one spritz and sniff me.  As I walked through the perfume department in Macy’s, I heard, “Hey! Having a good time?”

I looked up to see the women’s Chanel counter manned (in every sense of the word) by a cute young guy in a — get this — suit and tie — catnip to a woman over the age of 20.  I kept walking but looked around to see who he was talking to.  There was no one else.  He made eye contact.  At least, I think he did.  I was distracted by the dimples.

Thank God, I had just washed my hair and was wearing make-up to have my passport photo taken.  I assume he was confused because I’m short, like a teenager, and, I thought, not unattractive in my gray tights, my black suede Uggs, and, unlike the little plastic dog-walking floozy, my puffy jacket was covering my considerable fanny.

Did I want to be spritzed by a handsome guy with bad eyesight selling women’s perfume?  Oh, you bet I did!  But, I refrained.  I am just not delusional enough to smell like a cougar.  I kept moving and smiled breezily like that model in the old “Charlie” perfume commercial (google it).

“I am now!”  I replied to his question. He laughed.  It’s always a good day when a 63-year old woman can make a young man laugh with her, not at her, so, who am I to complain?  Life is good (mostly).  Soli Deo Gloria!