It’s Christmas Eve!  And, for my family, that means three of the major fattening holiday food groups; a 1950s version of Beef Stroganoff served over canned chow mein noodles, 1960s Layered Green Salad, and My Grandma’s Boiled Custard.  In my immediate family, I am the only one who knows how to make it, and, at least two weeks ago, My Mother, My Sister, and The Daughter started asking me, “You’re making the custard, aren’t you?”  Yes, not to worry.

Never heard of Boiled Custard?  It isn’t actually boiled, and, well, if you aren’t from Kentucky or Tennessee, let me explain.

My maternal grandmother was a tee-totaler, a hard-working woman who was uprooted from her hometown in (very dry, alcohol-wise) eastern Kentucky and moved to Detroit in the 1920s, where jobs were plentiful and generally safer than working in a coal mine.  She brought with her a love of quilting and family and cooking.  Having corroborated her stories of our heritage at Ancestry.com, I wonder which of her recipes trace back to our ancestors who came through the Cumberland Gap from Virginia and North Carolina into Kentucky in the late 18th century.  Most people have heard of chicken and rolled dumplings and cornbread (sugarless and made with white cornmeal, of course), hams cured with salt and vegetables cooked to death with every imaginable cured pork product, but outside of the area, few have heard of “boiled” custard.

Every Christmas Eve after my grandfather died, she came to our house to spend the night and to make boiled custard.  This is not the custard that you might think of, baked in little cups in a bath of hot water.  This custard was drinkable.  And it was spiked.  Spiked by a woman who did not drink alcohol.  Ever.  Except on Christmas Eve.

I suspect that it was originally made with good Kentucky bourbon, but, in the mid- 20th century, in Detroit, it was made with my dad’s blended Canadian whiskey.  Grandma would stand at the stove, beating sugar into eggs and milk in the top of a makeshift double boiler.  As the mixture thickened, she would gesture for My Dad to add a little of the whiskey.  She would stir it for a minute, then taste it, and, invariably, gesture for Daddy to pour in a little more.  The process took several minutes, during which my tiny little tee-totaling Grandma consumed enough uncooked whiskey to bring a little extra Christmas cheer into her life.

When Grandma died in 1981, I decided that I needed to make it.  Unfortunately, there wasn’t a recipe.  I took some eggs, beat in some sugar, milk, and vanilla and used her double boiler.  As the mixture cooked, I tasted it and added sugar.  As it cooked, I stirred in the whiskey, as she did.  When it was as thick as I remembered, I removed it from the heat.  Alas, the eggs had over-cooked and curdled.

I tried it again and didn’t overcook it, but it still had a weird, lumpy texture.  Over time, I learned to strain it after cooking. I measured the ingredients so that I could reproduce it accurately every year.   Instead of whiskey, I tried Southern Comfort and dark rum.  Eventually, I went to bourbon, a Kentucky bourbon, of course.  Oh!  And in my version, the bourbon goes in just before I remove the custard from the heat.  It’s still hot, but most of the alcohol is retained.  Unlike Grandma, I like a lot of Christmas cheer at the holidays.

Yes, we drank this as children, because, ostensibly, the alcohol had “burned off.”  Tee-hee-hee!  Naughty children, we never let on that it was potent.  Of course, we were also children whose mothers rubbed our gums with whiskey when we were teething, so we were already ruined by the Demon Spirits.  I don’t recommend my version for children because it isn’t nearly as benign as Grandma’s.  Ladle some into a heat-proof measuring cup for the kiddies.  Keep the good stuff for yourself.

Why did they cook it?  Perhaps it was to ensure safety on the frontier.  Salmonella can be killed at 145° F.  Perhaps just to thicken it.  Why didn’t they use cream?  Who knows?  Let me know, if you do.

Don’t get chintzy on the quality of the vanilla, because it adds to the flavor, significantly.  I keep three different vanilla brands (plus vanilla beans and paste) in my over-stocked larder.  One of the three is clear, artificial, and used in decorator’s icing, where the color is more crucial than the flavor.

You can speed up the cooking process by warming all but two cups of the milk.  If you add hot milk to eggs, they will cook.  Use a clean candy thermometer (I have a separate deep frying thermometer to avoid grease contamination).  Technically, you can cook the mixture until it just coats the back of a spoon (you can see a trail when you run your finger through it), but I find that an imprecise way to cook and too “frontiersy”.  It may have worked for Grandma, but it doesn’t always work for me.

This looks like a LOT of bourbon, but, consider that the recipe makes about 70-ounces.  This translates into one ounce of bourbon for every 8-ounce cup of custard.  Surely, you wouldn’t put less than a shot (1½ ounces) in a drink, would you?  Why do you think Santa is so jolly when he leaves my house?

Note:  If your double boiler is smaller than mine (which holds the entire ½ gallon), make it in two batches.

Whisk the sugar thoroughly into the eggs.  Whisk in 2 cups of cold milk and pour into the top of a double boiler, sitting over simmering water.  Whisk in remaining cold or warm milk.  Stir constantly, until the mixture reaches 160°.  Pour in the bourbon and stir until the mixture reaches 170°.  Immediately remove from heat and pour into a heat-proof container (I use three, to speed up the cooling process) through a very fine sieve (I use a Chinois) or a strainer lined with cheesecloth, to remove any coagulated egg whites or yolk.  Cover and refrigerate until cold. (It thickens as it cools, so don’t overcook it.) Uncover and whisk the mixture.  Re-strain into serving container.  (I save the plastic milk container so that I can shake it up.)  Top each serving with a fresh grating of nutmeg.

Grandma’s 1930s double boiler fits snugly into my 1980s stock pot.  In the photo at bottom right, you can see the coagulated egg remains strained through the Chinois. 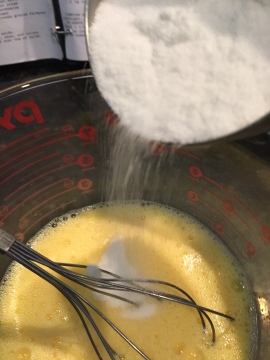 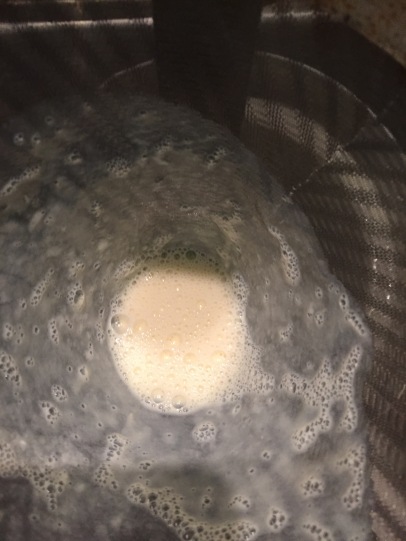