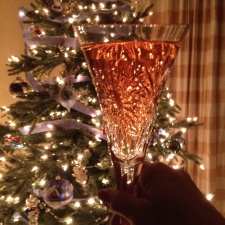 Here’s a toast to an exciting, safe, and glamorous New Year’s Eve for us all!  I will be on the sofa with a bottle of Champagne, in my Sparty yoga pants, watching my team in the Cotton Bowl, instead of doing the lotus position or planking or whatever it is that people who do yoga do.  (I wouldn’t know.  I just own the pants.)

While most people think of celebrating bowl games with chili or nacho cheese dip, I prefer to be a little more “casual glam” on New Year’s Eve.  You know what “casual chic” is, I’m sure, which, as a hotel in Bermuda once told us, “casual but elegant.”  Well, I’ve coined the phrase “casual glam” to describe enjoying fine French wine with fancy snacks, while wearing casual, but glamorous, clothing.

As a multilinguist[1], I had to look up the word “glam” to ensure that I wasn’t misleading you, Dear Reader.  The online Merriam-Webster dictionary defines “glam” with two meanings:  “1. extravagantly showy glamour” and “2.  Glitter Rock.”  [Glitter Rock is also known as “glam rock.”  Think Abba, Elton John, David Bowie.]  A search of the word on Urban Dictionary turned up their usual snark.  But they’re people born a long time after the 1970s, so, what do they know?

In the spirit of “glam rock,” my nails are painted a chic shade of silver, which my friends (who all survived the 70s) have commented on, favorably.  So, that’s how I’ll be “glamming” up my New Year’s Eve.  [Note to Urban Dictionary:  It is not erroneous to say “glamming” if you’re coining a new word.  Stick that in your dictionary of snark.]  I’ll be the most glamorous woman in my living room, although the BFF will come a close second.

This recipe has been adapted from the late, great chef and writer Pierre Franey.  Tonight, I’ll just be smearing mine on toasted and buttered croutons (pre-sliced baguettes from Wegman’s that I brush with softened butter and toast on baking sheets in the oven).

8 ounces smoked salmon (I like to use thick pieces)

Combine all ingredients in a food processor and pulse just until blended but chunky.  Adjust seasonings.  Transfer to a serving bowl and chill.  Before serving, bring to room temperature, so that it is spreadable.  Serve on or with buttered toast points or croutons or toasted mini-bagels (nice for brunch).

If you want to be really fancy and have more time on your hands than I usually do:

Preheat oven to 450°.  Grease a baking sheet or line with a silicone baking mat.

Thaw a sheet of frozen puff pastry for 20 minutes.  Open onto floured board and pat out flat. Cut out shapes with a cookie cutter (stars are perfect for New Year’s Eve; fish are cute; hearts are romantic for Valentine’s Day) and transfer to baking sheet.  Bake in preheated oven until puffed and golden, about 8-10 minutes.  Remove to cooling rack and bring to room temperature.  Split figures in half.  Fill a pastry bag with softened mousse and pipe onto cooled pastry, using a large cylinder tip or large star tip (if you are really fancy).  Garnish with any combination of dill, capers, and/or chives.

The chives are from my garden today, December 31.

Half a recipe, for one little woman and her dog.

I think the Veuve would approve opening a bottle for one!

[1] Actually, I had to look up “multilinguist” to find out if it’s a real word, but the online Merriam-Webster is not certain, either, and asked me to explain why I was looking it up.  I know.  That sounds weird, even to me.  I told them I was trying to be pretentiously humorous.  I am fluent in English, get by in French and Spanish, can order in Italian, and sing in German.

That sounds just awful, doesn’t it?  Visions of decadence dance in your mind, something like that awful hip-hop version of “The Great Gatsby.”  Champagne makes me weak in the knees just thinking about it.  Maybe it’s the sexy shapes of the bottles.  Maybe it’s all the foil or the dangerous pressure that releases in a sweet sigh from beneath the stout little cork, held in place by the delicate wire muselet.  Maybe it’s the glittering bubbles that race up the insides of the flute and foam the surface. Maybe it’s because it’s meant to be gulped, not sipped, so that all that mousse fills the mouth with tiny explosions.  Maybe it’s the memories that fizz inside my head when I think of all the sparkling wine I’ve consumed.

Few things make me smile as much as a glass of Champagne sitting in front of me.  And Champagne is sooo versatile.  It goes with most every kind of food, and a glass before dinner fills me up with enough carbonation to act as an appetite suppressant.  That’s my story, and I’m sticking to it.

About 20 years ago, I met an importer of German wines, who conducted a guided tasting at our cavernous, local wine/liquor store.  The Veterinarian planned to join me later, so I sat in the backroom of the wine store, surrounded by cases of beer, some baguettes, some water, and a few good friends.  The Importer enlightened us with his expertise, and, an hour or so later, I staggered into the main area of the shop awaiting my ride home.  Naturally, I stopped to gaze longingly at the rack of Champagne.  Mr. Importer sidled up next to me.

“You like Champagne?”  It wasn’t a pick-up line, just one wine aficionado chatting with another.

“It’s my absolute favorite,” I replied, “especially a brut rosé.”

“Me, too,” he sighed.  “In fact, I’m a Champagne slut.”  We burst into a wine-fueled fit of laughter.  It sounded crazy, and it was so, so true.  When the Veterinarian arrived, we shared the joke with him, and, from then on, we were the Champagne Sluts.

I once took a job as artistic director of a dance company because the college agreed to pay me $1 for every ticket that I could sell to The Nutcracker.  We put enough butts in seats to buy me six bottles of Louis Roederer’s fabled Cristal cuvée.  The next year, I brought in enough to buy an entire case.  So, yes, I would do anything for Champagne. I argued with 50 children between the ages of 8 and 17, let them call me a “bitch,” and wrangled with their stage-mothers, so I could secure a case of really fine Champagne for my own needy family.  Then, Champagne got too expensive and was no compensation for the torture that listening to Waltz of the Flowers a thousand times can inflict on a sane person, so I quit.

It’s not just for NY’s Eve.

25 years ago, you could get a nice bottle of non-vintage Champagne or good quality sparkling wine at a reasonable price ($18-30), especially if you bought a case and got a discount.  We didn’t drink it like pop [See?  You can take the girl out of Michigan, but you can’t always make her say “soda.”), but there was always a special occasion, a birthday or anniversary, an adoption, a holiday, a full moon, a hot tub, a roaring fire, whatever.  Then, the price started to creep up.  We gave up the expensive stuff and went in search of bargains on Champagne from equally wonderful but little-known (in the U.S.) producers, sparkling wine from the Loire and from the great Champagne producers working in California, and Prosecco from Italy.  There was even decent sparkling wine from Spain, Chile, and — wait for it — New Mexico!

My Mother regularly gave the Veterinarian a bottle of non-vintage Veuve Clicquot for Christmas and, six months later, for his birthday.  With the bright yellow label, it was the one bottle of wine she could pick out at the liquor store that she knew would delight him.  It became his favorite brand because of the taste and became mine because of its name. Veuve is the French word for “widow”.

In the nineteenth century, my heroine, Madame Barbe-Nicole Clicquot (née Ponsardin), was 27 when she inherited her husband’s Champagne house and not only struggled to keep it and her family’s good name alive but revolutionized the production, marketing, and popularity of Champagne.[1]  She remains known as La Grande Dame de Champagne, and Veuve’s best vintage is named her honor.

Three years ago, the Veterinarian sailed over the horizon, and the Daughter and I sat in our living room with two of our dearest friends and drank a bottle of Veuve in his memory.  A week later, the night before his memorial service, we toasted him with another bottle over dinner with another group of dear friends.  The perfect send-off for a Champagne slut by his own veuve.

How to open a bottle of Champagne or sparkling wine

Opening a bottle of Champagne is one of my more ridiculous talents.  I once opened a dozen bottles of sparkling wine at a wedding reception because no one else knew how to do it.  Initially, I was a little embarrassed that I was so adept at such a frivolous task, but I served an important function on the couple’s big day. (It’s really not tricky.)

Let the bottle sit quietly upright so the pressure settles. (Chilling it upright in a bucket is ideal.)

Remove the foil from around the neck, and place a clean dish towel over the top of the muselet (the wire cage).

Working underneath the towel, untwist the loop and remove the wire from the cork.

Holding the cork away from your face, grasp it firmly with the towel, and slowly twist the bottle (not the cork), until the cork releases.  You should hear a sweet little sigh, not an explosion.

The towel keeps the cork from shooting across the room and catches any spills.

Pour into a clean (ie, grease- and soap-free) flute.

[1] The Widow Clicquot: The Story of a Champagne Empire and the Woman Who Ruled It, by Tilar J. Mazzeo