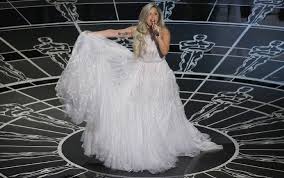 Did you catch Lady Gaga honoring the 50th Anniversary of the film version of The Sound of Music on the Academy Awards
last week?  Were you shocked?  I was apprehensive when she started to sing, because  I didn’t want to see a travesty made of a film whose score was embedded in my 13-year old brain.  As I listened to her well-rehearsed singing, I saw her nervousness in the amateurish way she flipped her gown.  Stefani Germanotta, the girl behind the outrageous Mother Monster disguise, could have been performing in her living room for the neighbors.  I saw how important this was for her, and I started rooting for her.  For the first time ever, I identified with her as a performer.

Of course, singing “Climb Ev’ry Mountain” for the neighbors in your living room is in no way akin to having your foibles aired to hundreds of millions of viewers around the world.  Still, your reputation as an in-your-face know-it-all is at stake, especially when you take on some of the most beloved music ever put on film.

When I was growing up in the not-yet psychedelic 60s, it was a treat to dress up in your Sunday best (i.e., pretty dress, coat, probably patent leather shoes, and gloves) and go into downtown Detroit to see a movie at one of the grand old movie houses.  The Sound of Music premiered in March, 1962 at the now-demolished Madison Theater, which was built in 1917.  I saw it on the huge, curved screen and wept for the brave family, as they escaped the Nazis. It was a triumphant, happily-ever-after kind of story with pretty scenery, pretty people, and pretty music.  Who did not want to be Maria?

I was raised as a Roman Catholic and taught by nuns who had no sense of humor beyond corporal punishment (so it seemed).  It never occurred to me that nuns smiled or sang or had fulfilling lives locked away in a convent.  I could well imagine that they would give “a problem like Maria” the heave-ho from their cloistered world.  I had not imagined that the heave-ho would send the problem into a beautiful home with a handsome father and adorable children, with evil Nazis threatening their idyll in the Alps.

In the days before VHS tapes, DVDs, and video on demand, the soundtrack album of a movie or stage show allowed you to experience it over and over again.  In 1965, The Sound of Music became my favorite, surpassing Mary Poppins.  I wanted to waltz with the sorely misguided Rolf in my family’s conservatory.  I wanted to ride through the streets of Salzburg singing about “bright copper kettles” (which I had never seen) and “warm woolen mittens” (which I owned).  I wanted to sing “Edelweiss” on a darkened stage with tears streaming down my face.  I wanted to laugh in the face of the Baroness.  And, yes, I imagined myself bravely walking down the aisle to marry the handsome Captain while nuns sang “How do solve a problem like Maria?”  With marriage, evidently.  Ah, Captain von Trapp…

I saw Christopher Plummer again onstage as Iago with James Earl Jones as the titular “Othello.”  What a performer!  Forget how good he was pretending onscreen that he didn’t hate playing Captain von Trapp in what he has described as potential “mawkishness.”  Here he was on a Sunday afternoon at the Morris A. Mechanic Theatre in Baltimore in 1981, providing me with a lesson in stagecraft. At his entrance, the audience applauded enthusiastically.

However, the production capitalized on Mr. Jones’ notoriety as the voice of Darth Vader.  In my feeble memory, the stage direction had him boldly make his first entrance at upstage center.  Othello was wearing all black, including a black cape.   His first lines were delivered from beneath a helmet.  The audience went wild.

I turned to The Veterinarian and said, “Cheesy, cheesy, cheesy.  This production’s going south in a hurry.”  I was confused.  Were we to think that Othello and Darth are the same?  Or was it just a cheap ploy to entertain the audience?  Or, worst of all, were they going to upstage Mr. Plummer with their theatrics?

There was more about the staging (especially the lighting, as I recall) that I didn’t like.  I recently noticed that Kelsey Grammer, pre-Cheers, played “Cassio” in that production, which, I am sorry to say, didn’t make an impression on me, either.  [I don’t recall who played Desdemona, and a google search was no help.] As the play progressed, though, its esteemed leads lived up to their reputations.  They told the story without gimmicks, although there were more theatrics, some unintended.

During a duel, one of the actors’ swords flew from his hand, off the stage, and into the lap of an elderly lady in the front row.  The theater went silent.  Ushers hesitantly moved forward.  Without breaking character, Mr. Plummer leapt from the stage and knelt on one knee in front of the startled lady.  He removed the sword and spoke quietly to her, then kissed her hand and ran up the stairs, back on the stage, and, still in character, haughtily tossed the sword to its actor.  The house went wild.  I swooned in my seat.   Mr. Plummer went on to Broadway and won a Tony award for his Iago.  I would have given it to him just for what I saw in that production.  Ah, Captain von Trapp…

Theatrics, used appropriately, can add excitement to a production.  Some, like the falling chandelier in Phantom of the Opera, are costly, yet “cheap tricks.”  Others make ordinary lives more interesting.  Apparently, the play and movie version of The Sound of Music were dramatized to make the story of the von Trapps more thrilling, as if defying the Nazis wasn’t compelling enough.  There was no dramatic escape across the Alps, just a train ride to Italy and a boat to London, then on to the U.S.  The Captain actually was quite genial, and Maria said in her autobiography Maria that she married the Captain for the sake of the children and learned to love him later, a different kind of romance.

I sang The Sound of Music around my house for three years, until I became captivated by Barbra Streisand in Funny Girl, a much edgier story line for an adolescent girl who was “sixteen going on seventeen” in the more cynical, psychedelic late 60s.  I saw myself on that tugboat in New York Harbor singing my lungs out, chasing down my star-crossed lover, a bittersweet story, a different kind of romance.  Both movies were based on real people, but fleeting happiness is not as compelling in the long run, so I went back to Rodgers’ and Hammerstein’s more hopeful story.

At the end of her Sound of Music medley, Stefani looked humbled at the appearance of the fabulous Julie Andrews onstage with her.  All the time she was singing the iconic songs (my only complaint is that she mimicked Ms. Andrews’ English accent, as I mimicked Ms. Streisand’s Brooklyn accent), she knew that the icon, herself, was standing in the wings.  How much braver is it to be yourself than to hide behind outlandish costumes and snarl at your audience, “cheap tricks,” all of them?  Brava, Ms. Germanotta, brava!

While I sing in choral groups (and once sang in a chorus on the stage at Carnegie Hall under the direction of the great John Rutter), I will never sing a solo in front of anyone except the BFF, not even in the shower, never again in someone’s living room or basement or garage.  And no one is asking me to, so who am I to complain?  Life is good (mostly).  Soli Deo Gloria!

It’s a boring week.  I’ve discovered that I can test my prospective dates by making them read this blog first.  I say, “Read my blog, and let me know if you’re still interested.”  The blog is a deal-breaker, which makes it the perfect test.  My profile photos are catchy, my text clever, but the “real me” is just too much, apparently.  “Real Suzanne” is not coming over to your house on a first date for a drink and does not want to have sex with you within the first several months that I know you, if ever.  “Real Suzanne” can tell if you’re a phony.  “Real Suzanne” is probably a lot smarter than you are, which is a real turn-off, for her.

I got lots of scammers this week.  Anthropologists have missed the best marker of all to attract a mate, good grammar.  One had a well-written profile in which he said he flies his own airplane, so, after he emailed me in broken English, I responded by asking what kind of airplane he flies?  Naturally, he did not respond.  They never do when they know you’re going to catch them in a lie.

I did not respond to an email from a guy with no profile photo that said, “I lie if I not tell you your sexy!! [sic]”

From a guy whose photo looks like a young Paul Newman, ” i hope the weather is getting better over there for you too. [sic]” He lives in NY and shows a photo of himself with a recently deceased celebrity whom he identifies as his father.

I reported another one who stole a woman’s photo and profile and claimed that she was his intermediary.

I had two emails from different men who claim to have post-graduate degrees with this explanation, “I have tried to upload more pictures but I really do not know how it works been my first time on a dating site. [sic]”

From the geographically-challenged, a guy named “Pedro” who lives about 40 miles south of me, “do you have a lot of snow back there? [sic]”