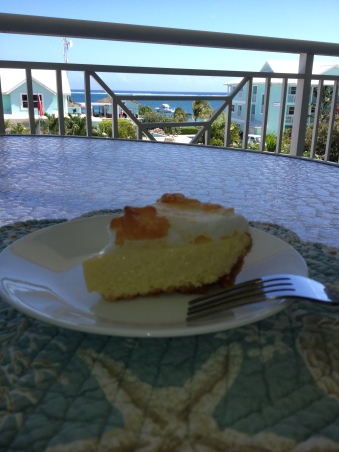 Note:  When I was in Grand Cayman last March, I made this pie on Pi Day.  Stranded this weekend (no hate mail, please) in my favorite place on Pie Day, without a functioning laptop, I’m republishing that same post.  Sorry to be redundant, but typing on this iPhone is a real pain.  By the way, I made Key Lime Pie earlier this week in Paradise for The Daughter and her beau but didn’t think to photograph it.  You’ll just have to take my word for it; it was delicious.  Hope it brings a breath of the tropics to your snowy day!

I am nearly useless at two things, pie crust and math, but even I know what pi means. It’s how I learned to make circle dance skirts.  In honor of Pi Day (3.14.15) and National Pie Day (1.23.16), I am sharing my recipe for the only credible pie that I can make.  Oh, I make a great pumpkin pie (with freshly ground black pepper) using pre-made crust.  I make a great apple tart using Pepperidge Farm Puff Pastry (aka Grease City) or phyllo dough.

I actually receive requests for my Key Lime Pie.  I have seen grown men swoon over it, so I added it to my list of accomplishments in my online dating profiles.  I can make it in my sleep.

When I first had it, back in the 70s in the Florida Keys, I was told that the recipe was on the Borden’s Sweetened Condensed Milk can.  I also learned that if it was green, it was bogus.  Of course, I couldn’t leave it alone and improved on it.  I added almonds to the crust and whipped egg whites to the filling to lighten the custard.

While I have made it in drafty sailboat ovens, in triplicate, and in too many vacation condos to count, the best that I ever made was in the 1980s, when my late mother-in-law and her husband moved to Naples, Florida and had a Key Lime tree in their backyard. Key limes are smaller and more bitter than Persian limes, which makes them the perfect foil for the sweetness of the meringue.  It takes an entire bag of Key limes (and squeezing) to make 1/2 cup of juice, but the flavor is the best.  I would rather use a bottled brand of Key lime juice (such as Nellie and Joe’s) than Persian limes and never “Real Lime.”

About five years ago, in Key Largo, for dessert, I had an amazing “Key Lime Cocktail” with graham cracker crumbs around the rim.  I’m still trying to perfect that recipe and will let you know when I’m successful.  Practice, after all, makes perfect.

Press crust on the bottom and up the sides of the pan.  Refrigerate for a minimum of 30 minutes.

4 egg whites (more, if you like a lot of meringue)

In a glass, grease-free bowl, whip egg whites and ¼ tsp of cream of tartar until foamy.  Add sugar and whip until stiff peaks form.  Set aside.

In a separate bowl, beat eggs until lemon-yellow.  Stir in lime peel and condensed milk until blended.  Thoroughly mix in lime juice until blended.  Fold ½ cup of the beaten egg whites into the custard mixture and pour into chilled crust.

Bake at 350° for 20 minutes or until filling just starts to brown around edges.  Remove pie from oven and increase heat to 500°.

Pile remaining meringue over filling completely, and bake until peaks are golden brown, about 5 minutes.

Note:  If you won’t be serving the pie for several hours and do not want to see the meringue “weep”, you can refrigerate the “un-meringued” pie, covered, until needed.  Just before serving, cover with meringue and brown in hot oven.